Dwarka pilgrimage is one of the most important pilgrimages in India. Read about Dwaraka temple of Gujarat.
Cultural India : Indian Pilgrimage : Dwarka 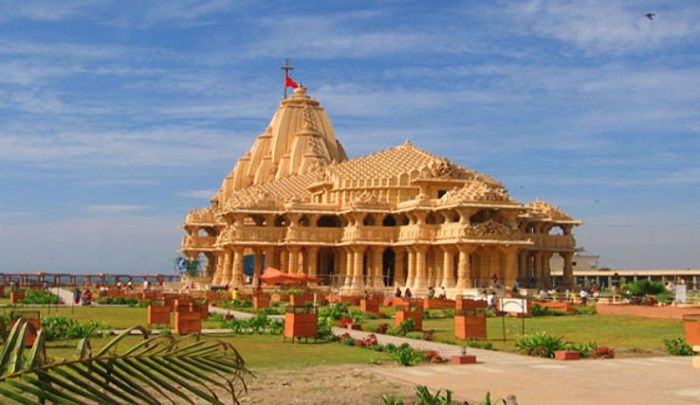 The holy Dwarka temple is located in the state of Gujarat located on the West of India. It is an important pilgrimage for all Hindus and is considered to be the ancient kingdom of Lord Krishna. In the bygone era, it is said that Dwarka was known as Kushasthali. According to legends, Lord Krishna left Mathura and traveled with the entire Yadava clan to the Gujarat coast. He founded the town situated right on the coast of Saurashtra in Gujarat and named it Swarnadwarka. The city of Dwaraka was supposed to have been submerged in the sea.

The present day temple was built by Vajranabh, the great grandson of Lord Krishna. All devout Hindus believe that the temple was set up in one night by supernatural forces commanded by Vajranabh. It is said that when Lord Krishna was on his deathbed, he ordered that everyone should evacuate the city and the city was submerged under the sea. The present day historians and archaeologists after excavating and through research claim that the sea engulfed five major settlements of the city. Dwarka is supposed to be the sixth.

The holy Dwarka Temple is built on the north of the Gomti River. It is estimated that the temple is almost 2500 years old. The temple is built lavishly and is five stories high. The delicately carved roof is built like a conical pyramid and reaches to a height of 157 feet! The main idol is black in color having four hands and measures around one meter tall. The most popular temple over here is the temple dedicated to Rukmini, Lord Krishna's wife, who is supposed to be the incarnation of Goddess Lakshmi. Dwarka is supposed to be one of the "Math" (religious seat) established by the famous saint Adi Shankaracharya.