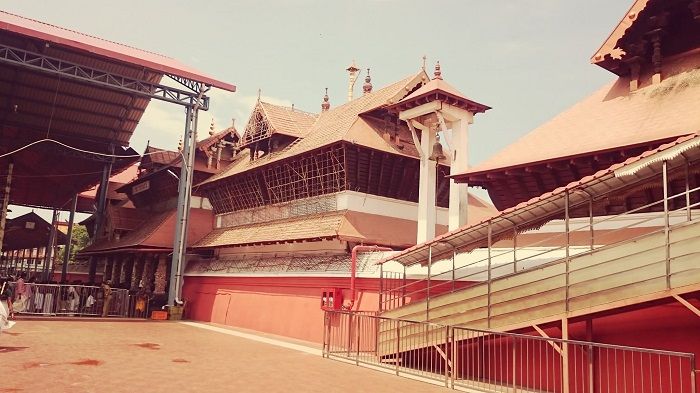 The Guruvayoor Temple is one of the most visited temples in South India. Located in Thrissur (Trichur) district of Kerala in India, this temple is dedicated to Lord Krishna, an incarnation of Lord Vishnu of the Hindu trinity. Guruvayur pilgrimage is also known as Bhoolokavaikunta, which literally means heaven on Earth and is almost 5000 years old. The Guruvayoor Temple has an interesting legend behind it. It is said that the idol in the temple was worshipped by Lord Brahma himself at the holy city of Dwarka. It was then installed in this place after Brihaspati and Vayu searched all the holy places on Earth.

The main sanctorum of the temple is known as "Shri Kovil". It is said that the great poet Melpathur Narayana Bhattathiri composed his famous Sanskrit poems called "Narayaneeyam" in the premises of this great temple. The idol over here is made up of a rare element known as "Patala Anjana". The temple was renovated extensively in the year 1970, after major parts of it were destroyed in a fire. Miraculously, not even a spark touched the main sanctorum where dry flower garlands were kept, located right in the path of the spreading fire.

The temple is known for its healing powers and one finds mental peace and tranquility upon visiting this lovely temple. Flower offerings made to the Lord are known as "Archanas". The temple is known to conduct maximum number of weddings and "Annaprasanam" (feeding rice to a child or the first time). An offering known as "Thulabharam" is also done in the temple premises in which a devotee is weighed offerings like coconuts, bananas and jaggery. The temple is home to around 60 elephants that are trained to do temple work. During festivals, these elephants are decorated beautifully and a procession is taken out.

The temple architecture is typical Kerala style and the walls of the temple are covered with beautiful murals and paintings. The idol of the deity is shown as having four hands and a peaceful look on the face. It is beautifully decorated with flower garlands and gold jewellery. There is a 33-meter high flag post known as "Dhwajastambha" and a 7-meter high lamp stand known as "Dipastambha". There are 13 concentric circular containers on top of each other that look absolutely divine when lit. The lord over here is known as Guruvayoorappan in local language.